****December 2016 Birth Announcements**** — The Bump
Sign up for The Bump!
Get weekly updates on baby and your body. Start by selecting which of these best describes you!

CONGRATULATIONS!
Use this thread to share baby's name, birth date, birth stats, pictures, and any other details about labor and delivery you would like to share
"Love Its" are welcome and appreciated on this thread, but please refrain from commenting with anything other than your baby's details. Save the warm wishes and congrats for individual labor/delivery/birth threads

***Keep in mind there is a 30-day limit on editing anything you post, and pictures cannot be deleted at this time. Any photos and/or information posted becomes proprietary to The Bump, granting the XO Corporation rights to use this in any way they choose (see https://www.thebump.com/terms.html).***
@BumpAdmin can we please get this pinned? 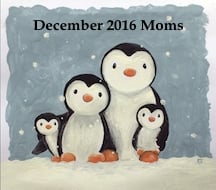