Steven Lee's Birth Story — The Bump
Sign up for The Bump!
Get weekly updates on baby and your body. Start by selecting which of these best describes you! Little Steven started his journey when my water broke at 4:53am on his due date (Saturday, September 21, 2013). We were admitted to Bethesda North at 6:15am. Labor was very mild until 10:24am, when they decided my contractions weren't strong enough to help him along, so Pitocin was administered at 11:13am. The medicine made the contractions extremely intense, close together, and last a very long time. After laboring for 12 hours naturally, but with Pitocin, Steven didn't seem to be progressing because I was tensing way too much during those contractions. At 4:15pm, I decided to have an epidural so I could calm enough to let Steven have an easier time and so I wouldn't stress as much and cause our heart-rates to keep climbing. By 5pm, it was administered and the contractions were less painful. I was able to relax for a few hours. Steven was being adorably stubborn and positioned "Sunny side up," which meant he was head-down but facing up toward my belly instead of toward the bed. He was also stationed high, remaining much to high to start making the journey to birth. At 7:15pm, they began to put me into several odd positions, trying to get him to turn. I didn't dilate much by now, only about 4 to 4 1/2 cm. I remained in different belly-turning poses for set amounts of time. Around 10:30pm, I became ill and got sick on the floor, but the Nurse assured me it meant something was changing and it was a good thing. Steven wasn't reacting well to the extended exposure to Pitocin, so it was turned off. At 10:58pm, I was dilated 9cm. But, Steven still didn't want to flip over or come down into the birth canal. Since my contractions had slowed and become irregular again, they elected to re-start Pitocin around 1:30am (on Sunday). The doctor came in and tried to manually turn Steven, but he continued to stubbornly turn back around. Even with numbing, it was very uncomfortable to have her turning him inside. They warned that if I didn't deliver by 4:50am that an emergency C-section would have to be performed. I was so scared, not as much about the procedure as the recovery ahead. I really wanted to be able to hold my baby all I wanted without worrying I might pop stitches open. No progress seemed to happen until I became ill again around 3am. Then, when I was checked at 3:30am, it was determined that my getting sick helped me reach 10cm dilation and pushed him down into position. We started pushing around 3:34am and Steven was born almost exactly an hour later at 4:32am (just shy of the threatened C-section time!). Thankfully he was perfectly healthy and only two stitches were necessary! The funny thing was that I had not eaten in 28 hours and my mother was in line at McDonald's when they told me I could push. We called her and requested some emergency chicken nuggets as my "reward" for getting through the delivery. Another funny thing about the delivery was that everyone who was by the bed supporting me was holding their breaths as I pushed. The joke was that they needed to stop and breathe because they would be on their own if they passed out on the floor. A third funny moment occurred when Steven's bottom was emerging, he had a bowel movement. Dr. Yang joked "that's what he thought of all that laboring, Mommy." We had some funny moments during the (fairly) painless, numbed delivery. It wasn't without worry completely, though, from being turned to his side for delivery, his cord was loosely wrapped around his neck. Thankfully, it was quickly moved and caused no problems. The moment he was delivered and placed onto my tummy, both Philip and I cried like babies. He is perfect. 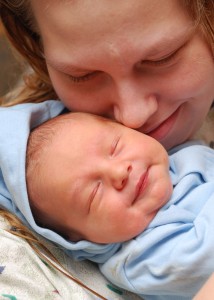